by Mark at Pilot | Theses & Dissertations

Possibly the most famous PhD thesis in history is that written by Marie Curie in 1903. Entitled “Recherches sur les substances radioacitves” which translates as “Research on Radioactive Substances“, it became one of the most important scientific papers of the last century and led to Marie Curie winning the Nobel Prize for Physics that year, being the first time a woman had ever won a Nobel Prize. Incredibly she also won a second Nobel Prize in 1911, that time for Chemistry. This made her the first person to ever win two Nobel Prizes and she remains the only person who has ever won Nobel Prizes in more than one branch of science. 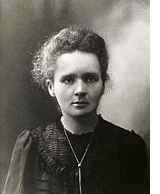 Marie Curie was Polish and was born as Maria Sklodowska in 1867 in Warsaw. With Poland being part of the Russian Empire and educational censorship being firmly entrenched at that time, it meant that the young Maria had to study at the clandestine Uniwersytet Latający (which translates as ‘Flying’ or ‘Floating’ University). At the age of 24 she moved to study higher degrees at the University of Paris and to continue her scientific research there, leading to her famous PhD thesis on radioactive substances and also to her first Nobel Prize which she shared with her husband Pierre Curie and the physicist Henri Becquerel. It was her time in France which also led to her being subsequently referred to as Marierather than Maria.

“I am among those who think that science has great beauty. A scientist in his laboratory is not only a technician: he is also a child placed before natural phenomena which impress him like a fairy tale.”

Following on from the discovery of X-rays by Wilhelm Roentgen in 1895 and Henri Becquerel’s discovery that uranium salts emitted similar penetration properties, Marie Curie’s PhD thesis investigated uranium rays as a starting point, but in the process discovered that the air around uranium rays is made to conduct electricity. She deduced that the process was caused by properties of the atoms themselves (a huge discovery in itself, subsequently and ultimately helping to overturn previous assumptions that atoms could not be divided). It was from that starting point, and the search for other elements which emitted similar penetrating rays, that Curie eventually discovered – and named – two previously unknown elements; Radium and Polonium. The latter she so named in honour of Poland, the country of her birth. She also authored the ‘Theory of Radioactivity’, a term which she invented and, more importantly, represented this whole new area of physics which she’d discovered. 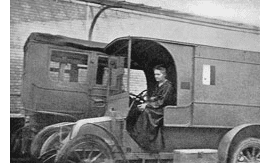 Curie also developed techniques for isolating radioactive isotopes and, using those isotopes, conducted the world’s first studies into the treatment of neoplasms (tumours). She made another giant leap, discovering that tumour-forming cells were killed faster than healthy cells when exposed to radium. Following this, with the advent of World War 1, she established the first radiological centres for wounded military. Part of the treatment involved injecting radon (then known vaguely as ‘radium emanation’) to sterilise infected tissues.

Curie lived until the age of 66, passing away in 1934 due to aplastic anaemia, which tragically and ironically was caused by the very radium and radiation which she had discovered, studied and used in the mobile X-ray & treatment centres that she had set up during World War 1. Estimates say that the X-ray and radon treatment units helped over one million wounded soldiers during the course of the war but in an ironic twist it was years of being in close proximity to isotopes emitting radiation and X-ray machines which caused her own demise. In recent times the risks are now better understood and safeguards are in place to protect people working in such areas, however in Marie Curie’s time this was all totally new science. Hence her written papers, theses and even her cook book from the 1890s are, to this day, encased in lead-lined boxes because they are all still too radioactive and dangerous to handle!

Her work and astounding discoveries clearly have an impact on science, health and medicine to this day. Against incredible odds, which we haven’t even touched on here, Marie Curie rose to become a scientific icon and her legacy is unsurpassed. Read more about Marie Curie here and you can even read her original 1903 thesis here (note that it’s in French).

The Document Centre, founded originally in 1968 as ‘R.G. Scales’, was born almost exactly a century after Marie Curie who was born in late 1867. We are based in Southwark Bridge Road, SE1, just a stone’s throw from London Bridge Station, and specialise particularly in thesis and dissertation printing and binding, hence our interest in historical theses, dissertations, universities and so on. As well as thesis printing and binding we are a professional bookbinder, offering bespoke binding and book restoration, litho and digital printing services plus document duplication and large format printing. All of this is available from our Centre in SE1 but our thesis and dissertation printing and binding is also available as an online service. Students can therefore simply upload their thesis in the form of an Acrobat PDF document, select the number of pages they require printing (if any – students can bring in their own pre-printed sheets if preferred), then specify the number of theses they require binding, whether they want soft binding, hardback binding, wiro, velo or any other type of binding, along with optional extras like register ribbons and CD pockets etc., and order there and then online. We even offer ‘pay on collection’ and free delivery to many London universities through our online ordering service. Call 020 7928 9738, order your thesis printing and binding online or visit www.document-centre.co.uk for more details.

All images are licensed in the Public Domain under the Creative Commons Attribution 4.0 International license except for image of section of front cover from Marie Curie’s PhD thesis – source: gallica.bnf.fr / Bibliotheque Nationale de France.